Traffic monitoring cameras are essential tools of speed limits enforcement, contributing to road safety. Learn the difference between speed measurement techniques and where they are most helpful.

Every year, an estimated 1.25 million people die, and millions more suffer injuries in road accidents. The faster a vehicle moves, the higher the risk of a crash. The World Health Organization recommends several evidence-based measures to reduce fatalities and injuries. They cite speed management with cameras as one of the most effective deterrents. Read on to find out how speed cameras work.

Lawmakers set speed limits based on the function and design of the road and vehicle types (such as trucks versus cars). Cameras that measure speed may be fixed, portable, or mobile.

Cameras with fixed locations are predictable, and they directly influence traffic speed in a given area. The locations are determined based on accident patterns and other traffic data.

On the other hand, mobile and portable solutions can be used anywhere, such as in unmarked police cars. They contribute to road safety by inspiring drivers to respect traffic laws and speed limits in a general sense. 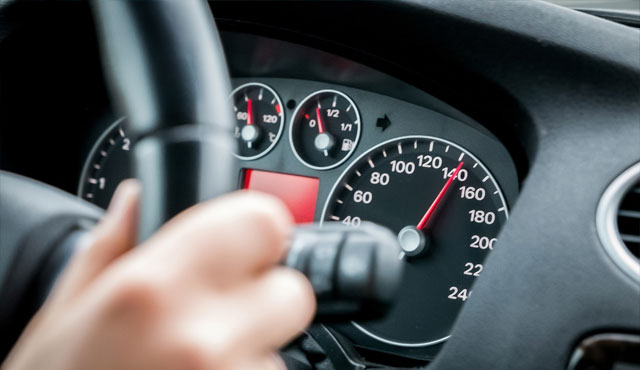 Speed cameras will measure a vehicle’s speed at a certain spot. Different cameras use different technologies such as laser, radar, video analytics, and more.

The disadvantage of the fixed spot speed solution is that people learn where the cameras are. Some mobile applications that aid navigation also indicate their location. They slow down as they approach the spot in question and then speed up again.

Still, at locations where people have died due to drivers going too fast or through a red light, they play an undeniable role in preventing even more accidents from happening.

For efficient and consistent speed enforcement, it is best to use fixed and portable/mobile speed cameras, such as Adaptive Recognition’s S1 portable speed- and traffic enforcement camera, simultaneously. Fixed ones to prevent violations in hazardous, accident-prone areas. Mobile ones to ensure that drivers respect speed limits in the broad sense.

Catch traffic violators before they know it. This all-in-one unit measures speed from 1 km away.

Systems that measure average speed across longer road sections or hazardous stretches such as tunnels or bridges deter drivers from speeding up again after having passed the camera.

The system works like this. As the vehicle enters the specific road section, an intelligent traffic monitoring camera – such as Adaptive Recognition’s entire range of cameras connected to the Globessey Data Server (GDS) – captures its number plate and timestamps the record. At the end of the road section, another traffic monitoring camera captures the number plate again.

From the data on the timestamps and the length of the road, it is easy to calculate the vehicle’s average speed. Note that the two cameras do not need to have speed measurement capability. Still, they need to capture number plates, record data, and communicate with different databases.

The advantage of these systems is that they can enforce speed limits over an entire stretch of road and not just one single spot.

Other Uses For Traffic Monitoring Cameras

Speed and traffic law enforcement aside, the data provided by smart traffic monitoring cameras are valuable for traffic and road usage statistics. The analysis of statistical data serves as the basis of certain traffic-related smart city solutions. For example, low emission zones and traffic flow optimization to avoid congestion are crucial concerns when creating sustainable and healthy smart cities.